High-End MicroTCA Carrier Hub (MCH) with Enterprise Class Ethernet Switching
The Enterprise-Class AM4904 / AM4910 MCH provides the central management and data switching entity for all kind of MicroTCA platforms.
To fit to the different needs of various applications the AM4904/AM4910 comes in four versions, (1) as a pure Gigabit Ethernet switching MCH (AM4904-BASE), in combination with (2) sRIO (AM4904-SRIO), or (3) PCIe switching (AM4904-PCIE) and (4) the highest bandwidth offering 10 Gigabit Ethernet switching (AM4910).
The powerful 600MHz processor for MCMC functionality and switching management enables a highly efficient MCH implementation for up to 12 AMCs, 2 cooling units and 4 power units and for usage in applications requiring a redundant architecture. Furthermore the support of Rear I/O functionality according to MTCA.4 is implemented. A sophisticated clock implementation supports various Telco clocks and the PCI Express Fabric Clocking distribution. 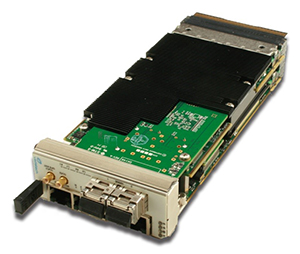 The VadaTech UTC004 is the most feature-rich MicroTCA Carrier Hub (MCH) in the market. Its management software is based on VadaTech’s robust Carrier Manager and Shelf Manager which have been deployed for years with proven results. The MCMC manages the Power Modules, Cooling Units, and up to 12 AMCs within the chassis. It also manages the optional PCIe Gen3, SRIO Gen2, 40GbE/10GbE or Crossbar Fat Pipe switches as well as the standard 1GbE with 10GbE uplink Base Channel switch. The Ethernet switches are managed with an enterprise grade Layer 3 switching/routing stack and support Synchronous Ethernet. 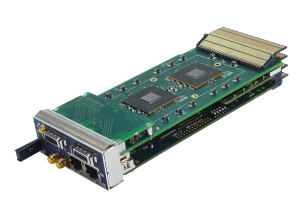 Overview
The NAT-MCH is a MicroTCA (uTCA/MTCA) Carrier Hub in the form factor of a single or double width, mid- or full-size Advanced Mezzanine Card (AMC). It provides the central management and data switching entity for all MicroTCA systems. The NAT-MCH comprises of a base module and numerous optional daughter cards which can be mounted on the base module. The NAT-MCH is MTCA.0, MTCA.1, MTCA.2, MTCA.3 and MTCA.4 compliant and delivers switching and hub functionality for the various system fabrics as defined in the AMC.x standard series or custom protocols based on Xilinx Kintex-7 FPGA.

CPU, memory and O/S
The NAT-MCH base board is equipped with a CPU of the Freescale ColdFire family of processors. The CPU operates at core frequency of 266 MHz. The NAT-MCH provides 32/64MB SDRAM and 16/32/64MB FLASH memory. The NAT-MCh operates on the field proven real-time kernel OK1.

Gigabit Ethernet Switch and 10GbE (XAUI) Support
The Gigabit Ethernet Switches incorporated in the NAT-MCH both provide a layer 2, non-blocking, low-latency Gigabit Ethernet switches, supporting VLAN as well as a port based rate control. The NAT-MCH supports Fabric A (1GbE) and Fabrics D-G (10GbE, XAUI) according to MTCA.0, MTCA.1 and MTCA.4 and PICMG SFP.1 R1.0, serving up to 13 AMCs as well as the update channel from the second MCH in redundant environments. Also supported are uplink ports at the front panel of the NAT-MCH in order to interconnect to other carriers, shelves or systems.

PCI Express Gen 3 Switch
The PCI Express Switching option allows PCIe Gen 3 connectivity for up to 12 AMCs at PCIe rates from x1 to x4. The PCIe chipsets provide a Quality of Service (QoS) module and are configurable in terms of a non-transparent port for multi-host support. The PCIe option can optionally provide a PCIe clock by a Spread Spectrum Clock (100MHz mean) or a fixed 100MHz clock. The clock can be provided compliant to HCSL or MLVDS signaling levels. The PCIe hub provides clustering support for six independent clusters with one configurable non-transparent upstream port. Each cluster offers its own transparent upstream port.

SRIO Gen 2 Switch
Alternatively the NAT-MCH can be equipped with a Serial Rapid I/O (SRIO Gen 2) daughther board to support uncontended low latency point-to-point connectivity between up to 12 AMC pipes. The SRIO hub supports x1 and x4 fat pipe transport density. A mixture of AMC modules with SRIO Gen 1 & Gen 2 is supported.