MIC-3960 6U CompactPCI® Media Carrier Board

The MIC-3960 is a 6U-high 1-slot CompactPCI media carrier board, with one slim CD-ROM. Designed to be highly cost-effective and simple to use, the MIC-3960 adds value to any CompactPCI system. It can easily expand storage capacity once placed in Advantech’s MIC-3042B series enclosures. F608 – 3U CompactPCI® Side Card for RAID Systems

The F608 is a 4HP SATA extension card for 3U Intel® based CompactPCI® single-board computers. It can be used in combination with the F14 and further boards of the Intel® low power family.

It offers four SATA interfaces over a SATA port multiplier via PCI Express® as well as one SATA slot on-board (from the chipset). Two individually configurable UARTs are accessible via D-Sub connector at the front. Two USB and two PCI Express® links are available via rear I/O. As an option, the F608 also offers the possibility to realize two optical Ethernet interfaces via SFP. 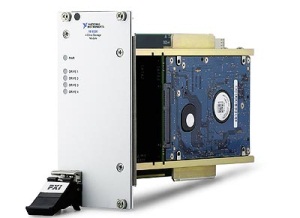 The NI 8260 in-chassis PXI Express/CompactPCI Express high-speed data storage module is part of the PXI streaming system offered by NI. Featuring an onboard PCI Express SATA controller, the module easily fits into a PXI Express chassis and provides up to 1 TB of storage space while occupying only three PXI slots. With the NI 8260, you can choose between hard-disk drives (HDDs) or solid-state drives (SSDs) for increased ruggedness. The HDD option contains four 250 GB 2.5 in. laptop SATA II platter drives. This module can sustain a transfer rate of 200 MB/s when using the HDDs and RAID-0 configuration. The configuration options are JBOD or software RAID-0 setups. RAID-0 provides the highest performance for streaming data to and from disk.

With the robust design of PXI and the NI 8260 high-speed storage module, you have a rugged and reliable solution for field testing or signal recording applications. You can use this module to not only stream high-speed data but also easily move data between multiple test setups or supplement the PXI system controller’s storage capacity.