Rugged COM Express, based on PICMG standard COM.0 or COM Express, has been developed for demanding embedded applications with extended requirements for thermal design, shock, vibration and EMC. Rugged COM Express, together with an application-specific carrier board, forms a semi-custom solution which is suited for application in extremely harsh, mobile and mission-critical environments.

The XC15 is an evaluation and development platform that can be used together with any type of Rugged COM Express module. The XC15 provides physical interfaces and connectors for nearly all current serial standard I/Os, which can be routed from the COM Express connectors to the carrier board. The XC15 comes with one COM Express slot and eight PCI Express card slots, including an onboard PCI Express Graphics (PEG) interface on a standard PCIe x16 connector. In addition, it provides three display ports, four onboard SATA connectors and two CAN interfaces which are available via SA-Adapters.
The functionality of all connectors depends on the Rugged COM Express module used on the XC15. It supports the Micro ATX form factor and can therefore operate in a PC system. Additional USB ports on the front panel for USB driven Flash disks for application storage, complement the memory configuration that is already available on the different COM Express modules.
For a first evaluation of the functions and performance of the Rugged COM Express module of choice, we strongly recommend using the XC15. Further useful accessories include an external PSU, a heat sink and fan, a DisplayPort to DVI adapter, and cables for UART and SATA HD. 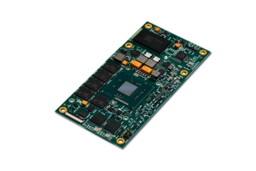 The XPedite8152 is a Rugged COM Express® module based on the Intel® Atom™ E3800 series of processors. It is based on the COM Express® Mini form factor, but is extended to 55 mm x 109 mm to provide up to 32 GB of SLC NAND flash as well as 4 GB of DDR3 ECC SDRAM. The XPedite8152 also supports an enhanced Type 10 pinout with one Dual-Mode DisplayPort, one Embedded DisplayPort, two Gigabit Ethernet interfaces, and three SATA interfaces.

With built-in test (BIT) support, true configuration and obsolescence management, Class III PCB fabrication and assembly, environmental qualification per MIL-STD-810, as well as many other features, the XPedite8152 is designed and tested for maximum reliability in the most demanding environments and applications that require long life cycles.

The Intel® Atom™ E3800 series processors are low-power system-on-chip (SoC) processors with integrated graphics and support for up to four cores operating at up to 1.91 GHz. Along with best-in-class performance-per-watt, the E3800 family supports extremely low operating temperatures, and its power-efficient 22 nm technology enables operation in the most demanding high-temperature environments. The XPedite8152 supports the E3825 processor in standard configurations and can be built to support the E3845, E3827, E3826, E3815, and E3805. The E3800 series is the 4th generation Atom™ processor from Intel® and was formerly known as the Bay Trail-I platform and Valleyview processor. 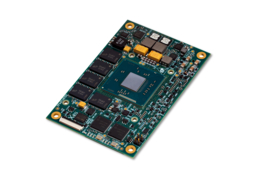 The XPedite8150 is a ruggedized COM Express module that complies with the COM Express Mini form factor (55 mm x 84 mm) and supports an enhanced Type 10 pinout. The ultra-small, standards-based, COM Express form factor brings processing to a wide range of applications. Available in both conduction- and air-cooled versions, the XPedite8150 supports the Intel® Atom processor. With up to four cores running at up to 1.91 GHz, the Intel® Atom delivers enhanced performance and efficiency for today’s network information processing and other embedded computing applications.

The XPedite8150 provides a high-performance, feature-rich solution for current and future generations of embedded applications. Wind River VxWorks and Linux Board Support Packages (BSPs) are available, as well as Microsoft Windows drivers.